Chipping away at the fuel tax

In July 2010 UK Transport Secretary, Philip Hammond, confirmed that the ‘Plug-In Car Grant’, designed to stimulate demand for low carbon vehicles, will go ahead from January 2011.

Parsing this sentence, repeated in many news articles, you might suppose this program is about greening the fleet. But if you read the majority of the first 20 Google hits for ‘plug in car grant’ you would see it is more about economic stimulation for the auto-industry.  The low-carbon part is the perfect excuse for a subsidy.

An article at puregreencars.com was clear despite its name: “Carmakers had been putting pressure on the new government to announce the electric car subsidy and had warned the UK would not be attractive for new technology auto investment without it.”  No handout, no investment.

If you have read here before, you know well that fuel tax, as a mechanism to fund roads, is unsustainable, and that all programming to move us into vehicles that directly use less hydrocarbons further endanger that funding source.

Notice that the UK Government has in the past been unable to execute its oft-touted national road-pricing program, but is now prepared to take tax dollars from somewhere to subsidize the purchase of cars (albeit clean ones) hence reducing the tax base needed to build, repair and operate the roads that these new, greener cars will use. Notice that they are not paying people to take transit, bike, or move closer to work, but they are using tax money to pump up an industry that can only cause congestion levels to increase.

Drivers prefer the autonomy, convenience, privacy, and timesaving of a car. It is very hard to transition people out of cars or to move domiciles for the guilt of a few pounds of carbon that they cannot see except in the abstract. If you can subsidize switching costs, a lot of people will elect to drive a cleaner car. But why not do this with differential road-pricing rather than cash handouts? You could start voluntarily and immediately, as it turns out.

I am all for government programming to nudge us in the right direction, however, the problem is that if the car user is being encouraged with direct subsidies, he is encouraged to drive more. The resting state of a world of heavily subsidized, 100% green, single-occupant vehicles is 24-hour total gridlock.

Green-at-all-costs needs slightly more thought than this.
Posted by Bern Grush at 22:03 No comments:

Canadians have a venerable history of disdain for road tolls, so that the spoiled and entitled commenters that whine and threaten at the end of every Toronto newspaper article about tolling are hardly equipped with novel thoughts.  Here are a couple of Krieghoffs from 150 years ago. According to the Art Gallery of Ontario (AGO), Cornelius Krieghoff apparently came down on the side of the scofflaws and perhaps admired them. In these depictions they seem to be drinking while driving, as well.  So not much has changed, although these fellows would likely be driving three separate SUVs if they were alive today. 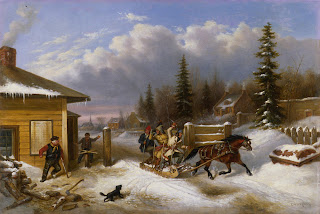 If you click-in and study these two paintings carefully, you can see that Kreighoff took some trouble to look at the tolling scofflaw problem from two different angles, but unfortunately came to the same conclusion. 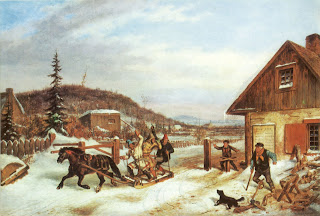 Can Government Toll Our Roads (Canada)

Edward Keenan at EYEWEEKLY gets it.

Bern Grush is with PayBySky Inc. (was Applied Telemetrics) in Toronto. He founded Skymeter Corp in 2002 and was its Chief Scientist until 2010. Realizing Congestion Pricing is not politically viable, he has turned to a new way out: EndOfDriving.org

1. I will be tracked
2. Transit must be fixed first
3. This is just another tax
4. It’s unfair to the poor
5. I already paid at the pump
6. So just increase the gas tax
7. It's unfair to rural drivers

“Relying on the gas tax is like relying on cardboard to keep the rain out – the longer you use it the less it works.” — Mary Peters, U.S. Secretary of Transportation, October 2008.

“The gas tax is broken, so any increase in gas tax is just a Band-Aid. It gets you through a very short term. It doesn't even remotely solve the problem” — Adrian Moore, Vice President, Reason, Jan 2009

A 3-year old drew the street outside his Toronto window

Congestion on its way up, up, up